Go to content
×
HISTORY
In 1763, twenty-eight members and two deacons of Walsall’s Presbyterian community seceded “because of the Minister’s Unitarianism”, and built the Dudley Street meeting-house – the first in the county of Staffordshire (to which Walsall belonged at that time). Numbers must have increased rapidly, because two side galleries were soon added to the building, and in 1791 a new and larger chapel was opened on the south side of Bridge Street.  The town’s first Sunday School was started in connection with the Dudley Street meetings (at premises in High Street) in 1789, later moving to new buildings adjacent to the Bridge Street premises in 1818.  By 1850, the average Sunday morning congregation is recorded as being 500.
By the middle of the nineteenth century, Bridge Street had become the leading Congregational church of Staffordshire.  But in 1857, when the Minister (Revd Thomas Grove) tried to investigate charges against one of the deacons (the father of Jerome K Jerome, in fact!), there was a secession.
It was as a result of this that “Ephratah Chapel” (later known as Wednesbury Road Congregational Church) was built, and opened in 1859.  This building, designed by Jerome, was of brick with stone dressings and crocketed pinnacles.  It was enlarged in 1901 and rebuilt after bomb damage in 1916. 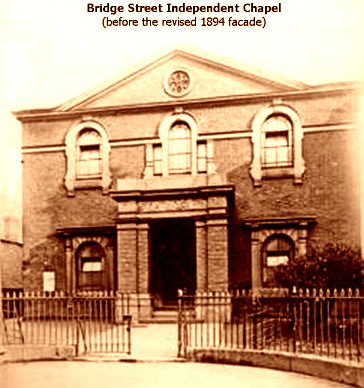 Between the two World Wars, the congregations of both Bridge Street and Wednesbury Road declined.  In 1945, they united on the Wednesbury Road site, after which the church was known as “Walsall Congregational”.
The Bridge Street premises were sold to the local Co-operative Society, although the building was used for a time as offices.  It survived until 1966, when it was acquired by a property developer and demolished.  West Bromwich Building Society currently occupies the part of Bridge Street that originally contained the old church’s entrance.  But the Bridge Street folk declared their intention “when conditions were timely, to form another church which would be the successor to that which was closing”.
The years following the Second World War were dominated by rationing and building restrictions imposed because of damage to property and scarcity of all manner of supplies.  But by the mid-1950s, restrictions were eased, and a corner-site on the edge of a proposed new housing estate was acquired from Walsall Corporation for the building of a new church, assembly rooms, and caretaker’s flat. Building commenced in the autumn of 1958, and the new church was dedicated by Revd Dr Sidney Berry on 26 September 1959 as Broadway Congregational Church.  The 30 members on the roll at the church’s opening (mainly from the former Bridge Street congregation), led by Church Secretary Arthur Stephens and under the guidance of the first Minister Revd Hilary Wilson, had by 1971 built Broadway into a thriving fellowship of 93 members, which had raised the money to build not only a manse but also the adjacent church hall.
At this time, a very significant change occurred, the effect of which is still keenly felt by many “life-long” Congregationalists.  This was the formation, in 1972, of the United Reformed Church from the merging of the Congregational Church in England & Wales with the Presbyterian Church of England.  A major consequence was that much of the “independence” so valued by our forebears was lost, as control of local property and aspects of church doctrine, finance & governance was handed over to regional “provinces” of the URC, more recently restyled as Synods.
Meanwhile, the large and ageing Wednesbury Road buildings were becoming increasingly burdensome to maintain.  In 1973, they were demolished and replaced by the smaller Glebe Centre, with the rest of the site redeveloped to accommodate an office block.  In October 1993, the remaining members of Glebe Centre URC moved to join the congregation at Broadway, constituting the church as we know it today, which retains responsibility for the Glebe Centre site.
In 2010, the present Walsall URC pastorate was formed comprising Broadway and the town's other two United Reformed churches, Blakenall & Hatherton.  All three were served by a single Minister, with a combined membership of about 150.
Back to content